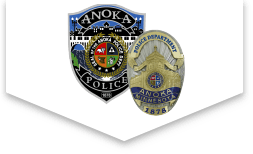 The Anoka S.W.A.T. Team was established in 1985. Its mission is to be prepared to respond to any immediate life-threatening situations or incident that requires specialized equipment or tactics that may develop within the city beyond that which can be provided by patrol personnel. Additionally, they are available to execute "high risk" drug and felony arrest warrants. In addition to monthly training, the team attends the Minnesota Tactical Officers Association Training Conference at Camp Ripley each September.

The training conference consists of scenario-based and firearms training with many other tactical teams from the metro area. While at the conference the Team has been the recipient of the "Top Team" award and individual members have been the recipient of the "Top Sniper" and "Top Gun" Awards on several occasions for displaying exceptional marksmanship and tactical skills.

The team is most frequently used for high-risk search warrants and has assisted the Anoka Hennepin Drug Task Force. Team members and the team itself have received numerous commendations for their past performance.